Why Bouncing Back from Difficult Situations is Hard to Do 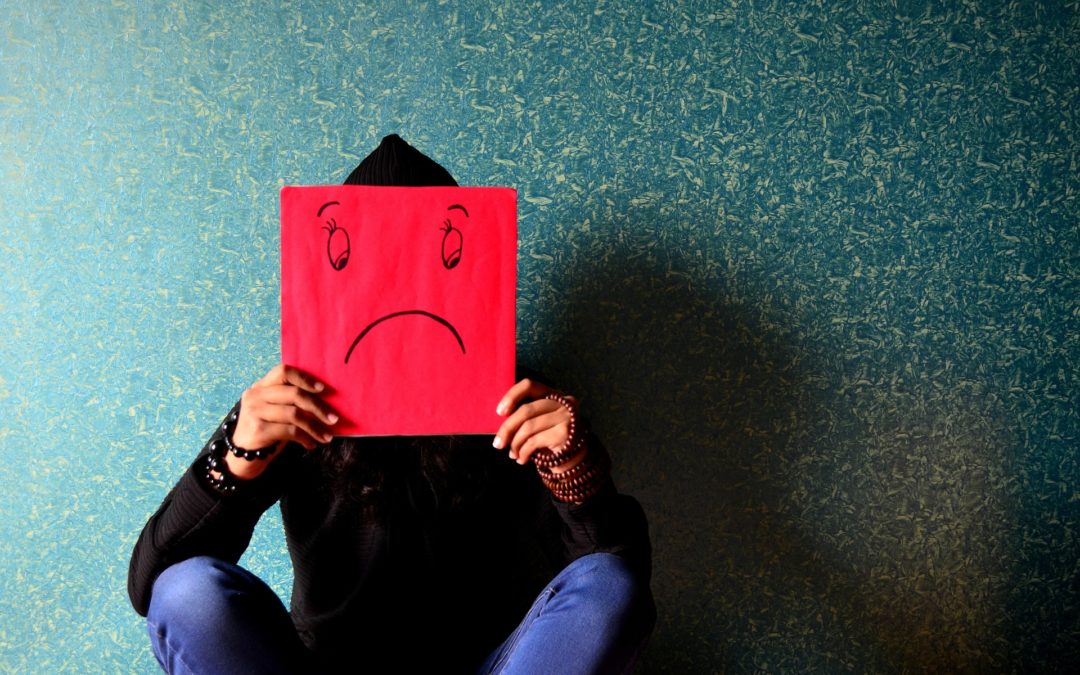 Bouncing back from difficult situations can be a significant struggle at times.

At some point or another, we’ve all been in a situation that just irked us to the core. We also may have encountered life experiences that made us feel deep sadness or powerlessness. We’ve likely all experienced moments of worry, blame, discouragement, jealousy, anger, revenge, rage, guilt, unworthiness – the list goes on.

When we find ourselves in these situations, recovering from them might take some time. Bouncing back from difficult situations sounds like it should be easy enough to do. Just “think positive,” right? Just “let it go” or “ignore it.”

The reality is that we can’t. We can’t just snap our fingers and not feel what we’re feeling. It’s more complex than that.

But once you understand why and how our emotions tie into vibrations, you can start to see a strategy for bouncing back.  For this article, we’re going to talk about the why and how of our emotions and the vibrational states we face on a day-to-day basis.

Next week, I will share with you a strategy you can use to help yourself and others, bounce back more easily from vibrationally low emotional states. Before we can do that, however, we first need a better understanding of how and why our emotions affect us the way they do. 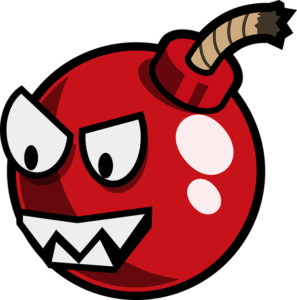 I don’t know about you, but anytime I’m grumpy and emitting vibrationally low emotions, I feel Iike a ticking time bomb. The last thing I want to hear is someone telling me to just “let it go,” or to “look on the bright side.” Or my all-time favorite (which I say with 100% sarcasm) is when someone tells me to “chill out.”

When I’m already drowning in not-so-fun emotions and someone tries to tell me to “relax” or “chill out” it’s as if they just grabbed the bomb from within me and started randomly pulling on wires to diffuse it. What they get, however, is not a diffused bomb, but one with a much shorter fuse. Or worse, I just explode altogether.

There’s a Better Way to Defuse a Bomb

Simply snapping out of it, or bouncing back, isn’t within anyone’s capacity in those moments of despair, anger, hatred, jealousy, revenge, guilt and more. But there is a process to recovery that does work and we can help each other get there, without yanking randomly on wires.

Before you can really understand how to help yourself or someone else that is experiencing a vibrationally low emotional state, you first have to understand the Emotional Scale.

Each emotion we feel has its own vibration. Those vibrations are slightly different for everyone, but there is a general scale that Esther Hicks shares in her book “Ask and It is Given” that I like to share as a guide. 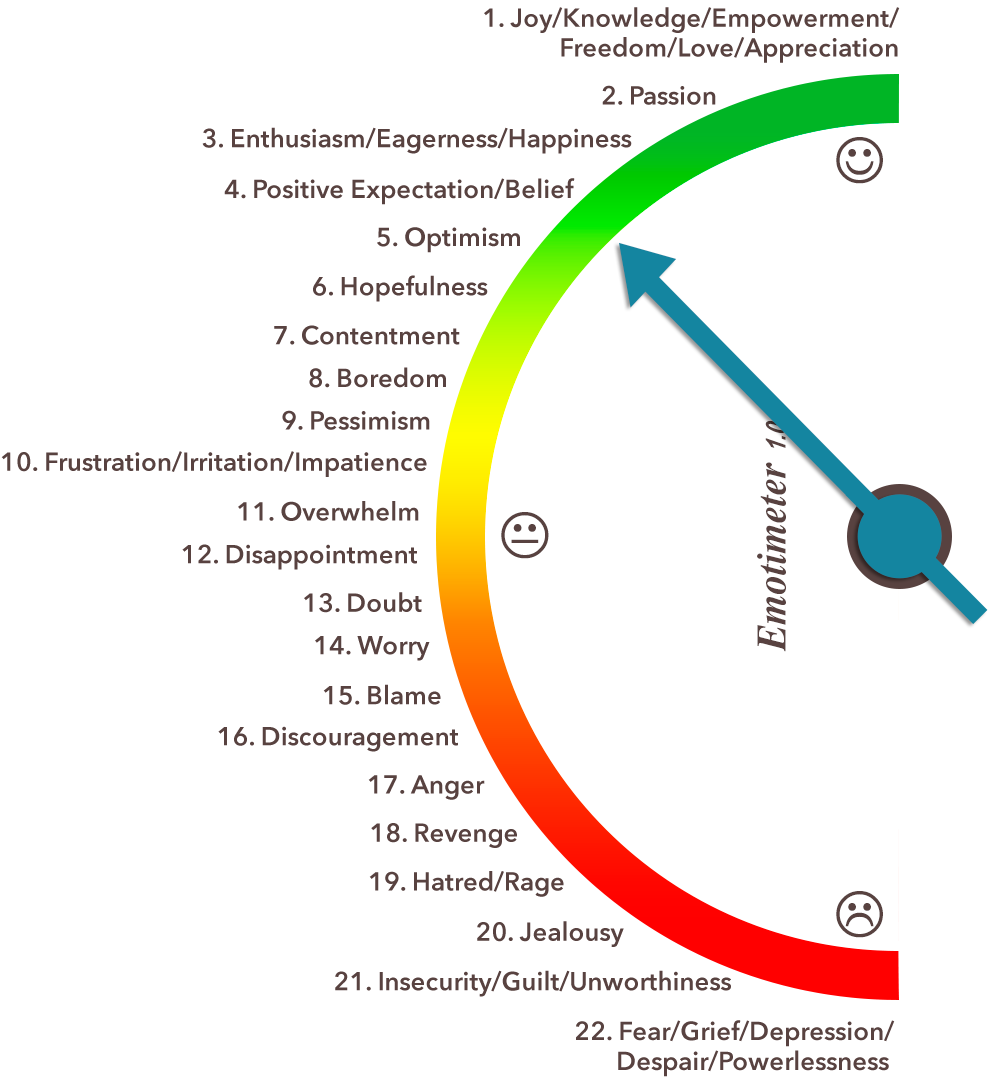 Each one of these emotions has its own vibrational state and the order may vary slightly for everyone because our interpretation for what each of these words means, is slightly different. But it’s not the naming of the emotion that really matters. It’s the FEELING of the emotion and the vibrational level that matters.

We Live in an Environment Oozing with Stressful Situations

We are constantly bombarded with stress and anxiety, and the typical responsibilities that go along with being an adult. Because of this, it can often seem easier to fall down to a lower vibration than it is to feel a happier and more joyful vibration.

When we are already feeling stressed, angry, or depressed, it’s easier to feel more of the same. Like attracts like. That’s the basis of the Law of Attraction. Climbing out of the lower vibrations takes effort.

Of course, others can help us get there and sometimes external influences can have a dramatic effect on our emotional state, but the effects won’t last unless you find ways to sustain them.

In my experience, woman seem to have a harder time bouncing back than men do for the normal day-to-day stresses. For example, my husband and I might argue over something. He’ll be over it and just fine about 5 minutes later. Five hours later, however, I’m still brooding and struggling to move on from it. His quick recovery only makes things worse because the voice in my head wonders why he doesn’t care that I’m still upset or how he can care so little about the argument.

The ego can really mess with us if we aren’t paying attention. But that in itself could easily be a topic all on its own. Maybe I’ll call that episode or topic “The Disruptive Forces of Ego” or something like that.

Anyway, my point is that women seem to get stuck in downward spirals of emotions for longer than men. We tend to have more drama in our lives than men and we’ve gotten really good at holding a grudge. We think about all possible angles for longer which makes it harder for us to move on from things and back up toward higher, more positive emotions.

From my perspective, he often does win our arguments, because I tend to give up before he will. We are both incredibly stubborn sometimes. 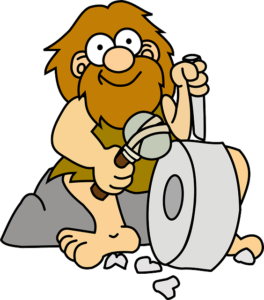 The differences in men and women and the way we process or think about things really seems to stem back to our most primitive survival instincts. Men would go out, hunt, protect and provide. Their decisions all had to be made quickly. Taking too long to think about something could cost them their lives. See the animal, take the shot, or starve (or worse). There was no time to look back and re-assess.

Women, on the other hand, were in charge of more complex things such as raising children, providing nourishment. Their decisions had a long-term impact. They were forced to analyze and asses and think about things from multiple angles.

To this day men are faced with a decision, they quickly look at the options, come to a decision, are satisfied with it, and they move on. They release the emotional ties to whatever it was and move on to the next thing.

Just this week, my husband and I were trying to pick a new logo concept for a business we’re creating. He had made a decision and thought “okay, done. Now onto the next thing.” I, on the other hand, was happy with it, but still wanted to look at other concepts, and try some more things. I was worried that the logo we had both agreed on might be a little to this or a little too that. His response was, “this one is good. We can always rebrand later.”

And while I completely agree with him, I still feel this urge to get it right.

Now I’m not saying that all men and women are like this. I’m just sharing what I’ve noticed through my role as a massage therapist and energy healer, as well as from my own life experiences.

Why “Snapping Out of a Funk” Doesn’t Work

Men and women both struggle to bounce back. But the way we bounce back is different as is the time it takes us to do so.

The longer we stay focused on something that makes us feel sad, uncomfortable, depressed, angry, worried or any other negative emotion, the lower our vibration can fall.

If you spend more time in the more positive and joyful emotions you will raise your vibration.

But we can’t just jump from a low vibration up to a higher one. We have to work our way up to it. The rate at which we travel up the Emotional Scale varies. It varies based on our thoughts, the situation, and even, as we were discussing, it can vary based on gender. It can also vary based on age.

We can’t just snap from one emotion to another because that’s not how the law of attraction works. Like attracts like. We can work our way through one emotional state to a similar one and then to the next similar state.

The .pdf download available on this page includes a chart for you to track your emotional state throughout the day. Try using it and see where you spend most of your time.

Next week I will share with you a strategy you can use to help yourself and others, bounce back more easily from vibrationally low emotional states.